The images of language

Inside the book is a torn chequered piece of paper on which the epigraph of the book was copied. 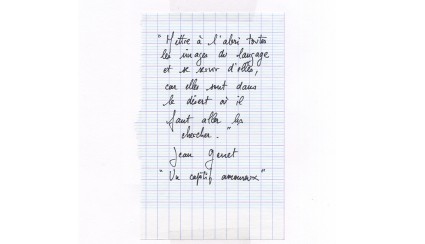 The corrected papers in the text named « A Prisoner of Love » was discovered in the room where Genet was found dead on the 15th April 1986 at the Jack’s Hotel rue Stephen-Pichon in Paris, near the Place d’Italie. Jacky, a close friend of Jean Genet’s, later told Leila Shahid that this sentence was not in the mauscript the day before Genet died. This work was published posthumously in 1986 by Gallimard. The editor specifies it is a Handwritten note, header of the last papers in this book.