NEVER MADE IT BACK
Portfolio
U.S.A.

NEVER MADE IT BACK

The 29th May 2000 Time magazine is a « Memorial Day » special issue. In the United States « Memorial Day » is celebrated each year on the last Monday in May. In the beginning it was created for people to pay their respects to the men and women who died in the Civil War. Today Memorial Day is about everyone who died for the homeland. 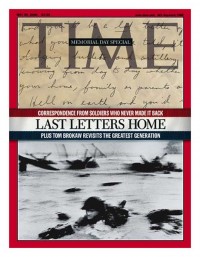 The Time cover is divided in two parts. The top one shows an excerpt from a letter written by an American soldier who died in the Omaha Beach marine assault in Normandy on 6th June 1944. The bottom part is illustrated with one of the famous photographs Robert CAPA took during that operation. The middle part connecting both images is divided in 3 strips: one is blue, one white, one red. On the first, red strip this sentence is written: « CORRESPONDANCE FROM SOLDIERS WHO NEVER MADE IT BACK ». On the second, white strip: « LAST LETTERS HOME ». On the third: « PLUS TOM BROKWAY REVISITS THE GREATEST GENERATION ».
During his trip, Alix’s father is thus confronted with the tragic fate of the American soldiers who left for France in June 1944 never to come back. History, when we update it, is revealing of the complex ties between two nations. What is the price of freedom? Must we forget to keep on living? When exactly do myths collapse or, on the contrary, when do they hatch? Who owes who? The « NEVER MADE IT BACK » installation shows a tapestry of the enlarged image of the photograph by Robert Capa that is printed on the Time cover.
The choice of leaving large spaces between the stitches of the tapestry – just like Alix did with her tapestry when she was six – allows me to conjure up the void left by those men who disappeared. 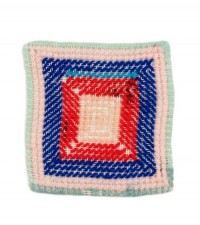 The tapestry is intentionnally bigger than the original image because of the importance of this event in everyone’s imagination.
The novel « Vertigo » by W.G. Sebald is a part of NEVER MADE IT BACK. W.G. Sebald never stopped questioning memory by gathering what was forgotten or repressed, and the texts or images that remained. 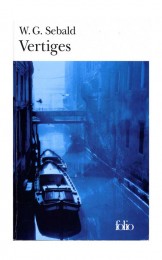 Using his personal memories as well as public tracks of collective memory, W.G. Sebald tried to give meaning to a memory that was slipping through his fingers. W.G. Sebald was born in 1944 in Germany and he felt especially concerned with that time of the post war period. He wondered about the lack of interest the German society was feeling for the destruction of Germany by allied bombings in the end of the war. He suffered from his father’s generation refusing to talk about the events of the war.
The town of Brest where Franck and Alix are living was almost entirely destroyed by allied bombings in the end of World War II.